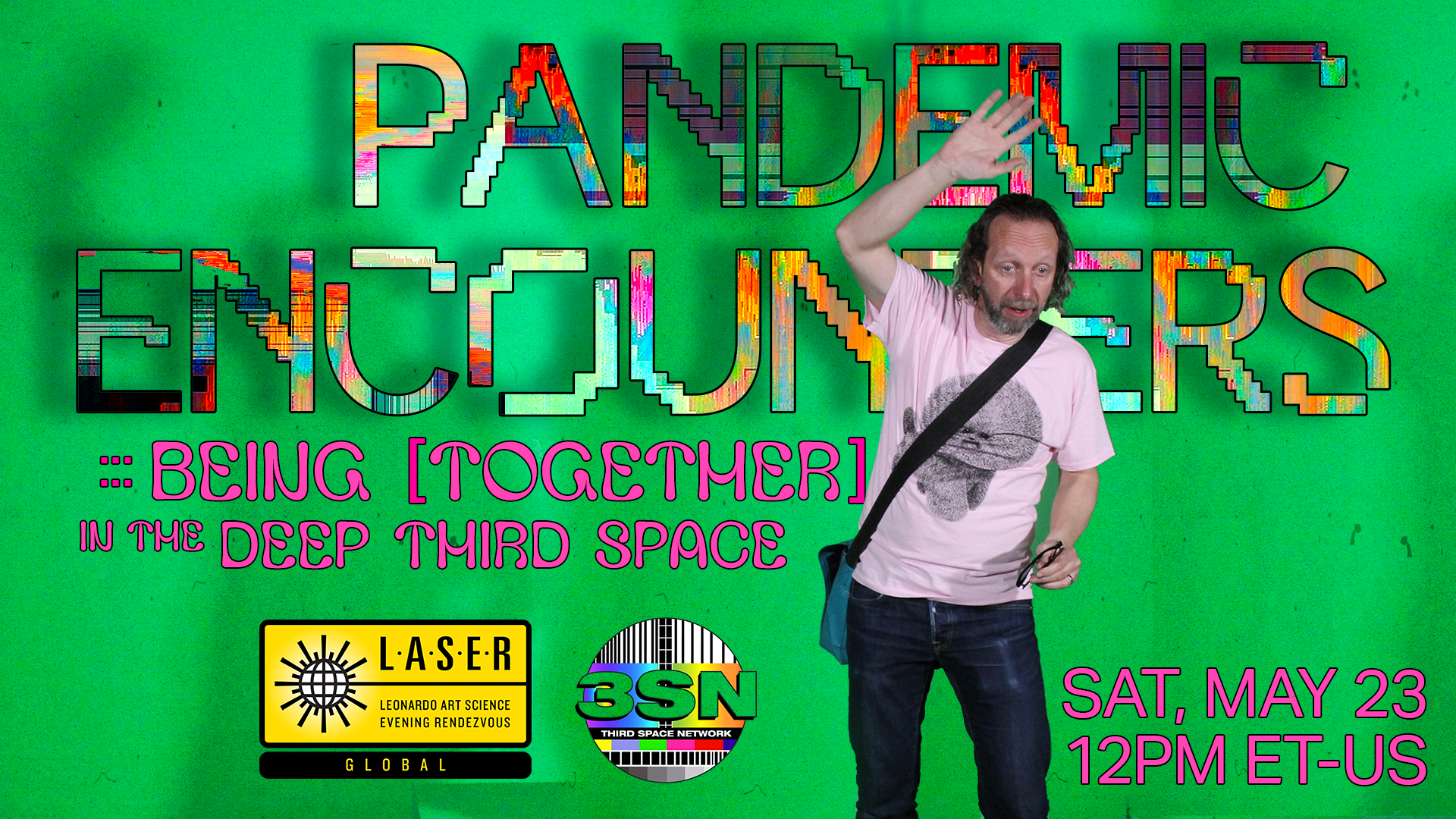 Pandemic Encounters ::: being[ together] in the deep third space
A Networked Performance Installation in collaboration with Paul Sermon & Gregory Kuhn
Performed by Paul Sermon and action-artists

Pandemic Encounters explores the implications of the migratory transition to the third space we are all experiencing. Even when we return to the so-called normal, we will be changed, when social interaction & human engagement will have undergone a radical transformation. In this new work, Paul Sermon performs as a live chroma-figure in a deep third space audio-visual environment, interacting with action-performers from around the world – artists, musicians, dancers, media practitioners and scientists – a collective response to a global pandemic that has triggered an unfolding metamorphosis of the human condition.

In this perilous time, we are witnessing the global phenomenon of a migration into the third space with unknown existential ramifications. We find ourselves, en masse, in a strange new world, a new medial landscape, like a hall of mirrors, gazing at reflections of ourselves + others through the lens of the ubiquitous Webcam. We have been forced into this telematic world to remove and isolate ourselves from the hellish outside reality of the pandemic. The third space has become for many a safe haven from a world turned upside down, a safety net, or a buffer zone to salvage and resurrect human contact – virtually – while remaining separated by distance & geography.

Pandemic Encounters is intended to collectively explore the implications of this migratory transition into the third space. Even when we return to the so-called normal, we will be changed, when social interaction & human engagement will have undergone a radical transformation. Who knows what this new world will look like, and who knows to what degree our social behaviors, interactions, intimacies, and creative actions will have been forever altered & reconfigured.

(Leonardo Art Science Evening Rendezvous) is Leonardo/ISAST’s international program of evening gatherings that bring artists and scientists together to provide the general public with a snapshot of the cultural environment of a region and to foster interdisciplinary networking. To learn more about how our LASER Hosts and to visit a LASER near you please visit our website.

Global LASER is a new series of networked events that bring together artists, scientists, and technologists in the creation of experimental forms of live Internet performance and creative dialogue.

Paul Sermon was born in Oxford, England, 1966. He was Awarded the Prix Ars Electronica Golden Nica, in the category of interactive art, for the hyper media installation ‘Think about the People now’ in Linz, Austria, September 1991. Sermon produced the ISDN videoconference installation ‘Telematic Vision’ as an Artist in Residence at the ZKM Center for Art and Media in Karlsruhe, Germany, from February to November 1993. He received the Sparkey Award from the Interactive Media Festival in Los Angeles for the telepresent installation ‘Telematic Dreaming’, June 1994. From 1993 to 1999 he worked as Dozent for Media Art at the HGB Academy of Fine Arts Leipzig, Germany. During this time he continued to produce further interactive telematic installations including ‘Telamatic Encounter’ in 1996 and ‘The Tables Turned’ in 1997 for the Ars Electronica Centre in Linz, and the ZKM Media Museum in Karlsruhe.
From 2000 to 2013 he was employed as Professor of Creative Technology at the University of Salford, School of Arts & Media. From 1997 to 2001 Sermon was a Guest Professor for Performance and Environment at The University of Art and Design Linz, Austria. Since September 2013 he has been a Professor of Visual Communication in the School of Art at the University of Brighton, United Kingdom.

Since the 1980s, multimedia artist, composer, writer and educator Randall Packer has worked at the intersection of interactive media, live performance, and networked art. He has received critical acclaim for his socially and politically infused critique of media culture, and has performed and exhibited at museums, theaters, and festivals internationally, including: NTT InterCommunication Center (Tokyo), ZKM Center for Art & Media (Karlsruhe), Walker Art Center, (Minneapolis), Corcoran Gallery of Art (Washington, DC), The Kitchen (New York City), ZERO1 Biennial (San Jose), Transmediale Festival of Media (Berlin), and Theater Artaud (San Francisco). Packer is a writer and scholar in new media, most notably the co-editor of Multimedia: From Wagner to Virtual Reality and the author of his long running blog: Reportage from the Aesthetic Edge. He has written extensively for publications including: MIT Press, Johns Hopkins University Press, the Leonardo Journal for the Arts & Sciences, LINK, ART LIES, Hyperallergic, and Cambridge University Press. He holds an MFA and PhD in music composition and has taught multimedia at the University of California Berkeley, Maryland Institute College of Art, American University, California Institute of the Arts, Johns Hopkins University, The Museum of Modern Art, and Nanyang Technological University (NTU) in Singapore. At NTU he founded and directed the Open Source Studio (OSS) project, an educational initiative exploring collaborative online research and teaching in the media arts. He also organized the Art of the Networked Practice Online Symposia in 2015 and 2018, global events that featured speakers, live performances, and participants from more than 40 countries around the world. Currently he is developing the Third Space Network (3SN), an Internet broadcast channel for live media arts and creative dialogue from his underground studio bunker in Washington, DC.

Gregory T. Kuhn has participated in the avant-garde of the performing arts since 1986, as sound engineer, scenic designer, composer, and collaborator. After receiving a BA in Music from Swarthmore College and doing graduate studies at Combs College of Music, he worked with Relache, New Music America 1987, and at the Yellow Springs Institute in Philadelphia. Since 1988 in the San Francisco Bay Area, he has contributed to numerous arts organizations, institutions, and individuals on a great diversity of local, national, and international projects for theater, multimedia, dance, and experimental and contemporary music performances. Kuhn is also an interdisciplinary artist. He collaborated on the sound installation Mori (1999), which has been exhibited in Japan and throughout the US, including a solo show at Kitchen Art Gallery in New York City.