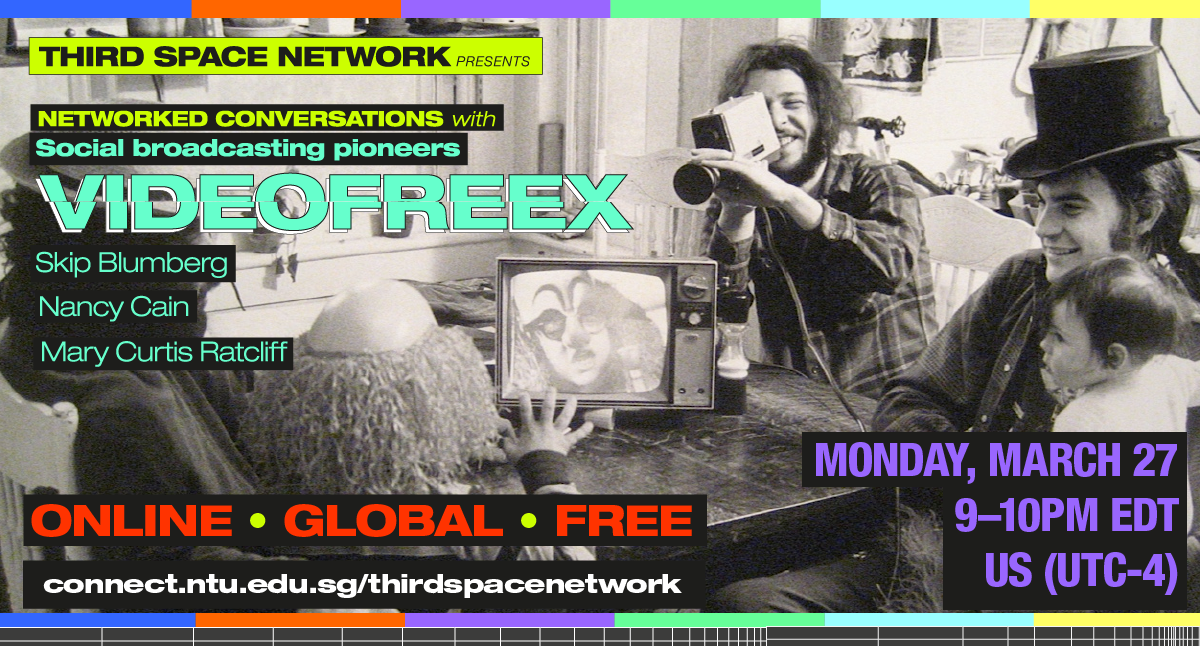 While television has traditionally been a passive medium, programmed media received by the masses, the Videofreex turned the paradigm upside down when they rented the Maple Tree Farm and established Lanesville TV in upstate New York in the early 1970s. It was here, in this setting far removed from the urban bustle of the New York City media center, that they began their experimental television project to forge the first pirate tv station in America.

The Videofreex story has legendary roots, when David Cort and Parry Teasdale met at Woodstock, wielding video cameras to document the Festival and the social movement that was exploding at the time. Afterwards they joined forces with Skip Blumberg, Nancy Cain, Bart Friedman, Davidson Gigliotti, Mary Curtis Ratcliff, Carol Vontobel, Ann Woodward, and the late Chuck Kennedy, to form a media collective with a mutual passion for video and its potential for catalyzing political, artistic and social transformation.

The Videofreex in their own funky way, reinvented television, reversing its power as a broadcast medium for engaging community, a creative medium for storytelling, an artisans approach to television, collapsing the space of transmission and reception to connect people locally with stories and collective narrative. The Videofreex foresaw television not as a corporate controlled delivery mechanism for reinforcing consumerism and mainstream popular culture, but rather as an artists’ platform for invention and social interaction.

The Videofreex embraced radical television in their interviews with political activists such as Abbie Hoffman; they captured alternative culture in America during the 1970s when it wasn’t properly covered by mainstream media; they reinvented broadcast journalism with their direct style that challenged packaged, network television news with its slick format; and perhaps most importantly, they saw video as a collaborative, social medium, a people’s media: encouraging viewer participation through the free and immediate exchange of ideas and images.

Skip Blumberg, co-founder of Videofreex, is a digital producer camcorder reporter, and video pioneer with hundreds of titles online; on Showtime, PBS, Disney Channel, National Geographic TV, and other TV channels internationally; and in the permanent collections of The Museum of Modern Art, Walker Art Center, Stedelijk Museum Amsterdam, Centre Pompidou Paris, and other venues around the world. Blumberg’s Pick Up Your Feet: The Double Dutch Show, Interviews with Interviewers (about interviewing), and Flying Morning Glory (on fire) are considered documentary video classics. In Motion with Michael Moschen has received 1,000,000+ YouTube views. His latest video is Growing Up Bonobo. Blumberg is the recipient of 3 Emmys, an Ohio State University Journalism Award, a Guggenheim Fellowship, and many other honors. Skip has produced numerous educational and fundraising films and conducted hundreds of production workshops, university and school classes, and in-person screenings, including as U.S. Department of State Cultural Envoy and Artistic Director of MyHero.com’s Global Exchange. He is President/Founder of Friends of City Hall Park (NYC).

Mary Curtis Ratcliff, co-founder of Videofreex, left the collective shortly after they moved to Lanesville. By 1973 she had migrated to the San Francisco Bay Area. In California, Ratcliff’s wind sculptures and ceremonial pieces were used in the early women’s spirituality movement. Since 1999, Ratcliff has concentrated increasingly on two-dimensional work, integrating photography, drawing, painting, and image transfer techniques in multi-layered, intricate explorations of nature, pattern, and perception. Ratcliff’s artwork has been exhibited in over 20 solo shows and is represented in the collections of the Fine Arts Museums of San Francisco and the Oakland Museum of California. She lives and works in Berkeley, CA and is a member of Oakland’s Mercury 20 Gallery and SFMOMA Artists Gallery.

Davidson Gigliotti, an original member of the alternative video collectives Videofreex and Media Bus, Davidson Gigliotti was one of video’s pioneers. In 1975 he became Director of Video at the Experimental Intermedia Foundation in New York, where he worked until 1987. His body of single-channel tapes and multi-channel video installations includes studies of urban and rural environments, in which he recreates the experience of place. He has also produced anthologies of the work of contemporary performance artists and musicians.