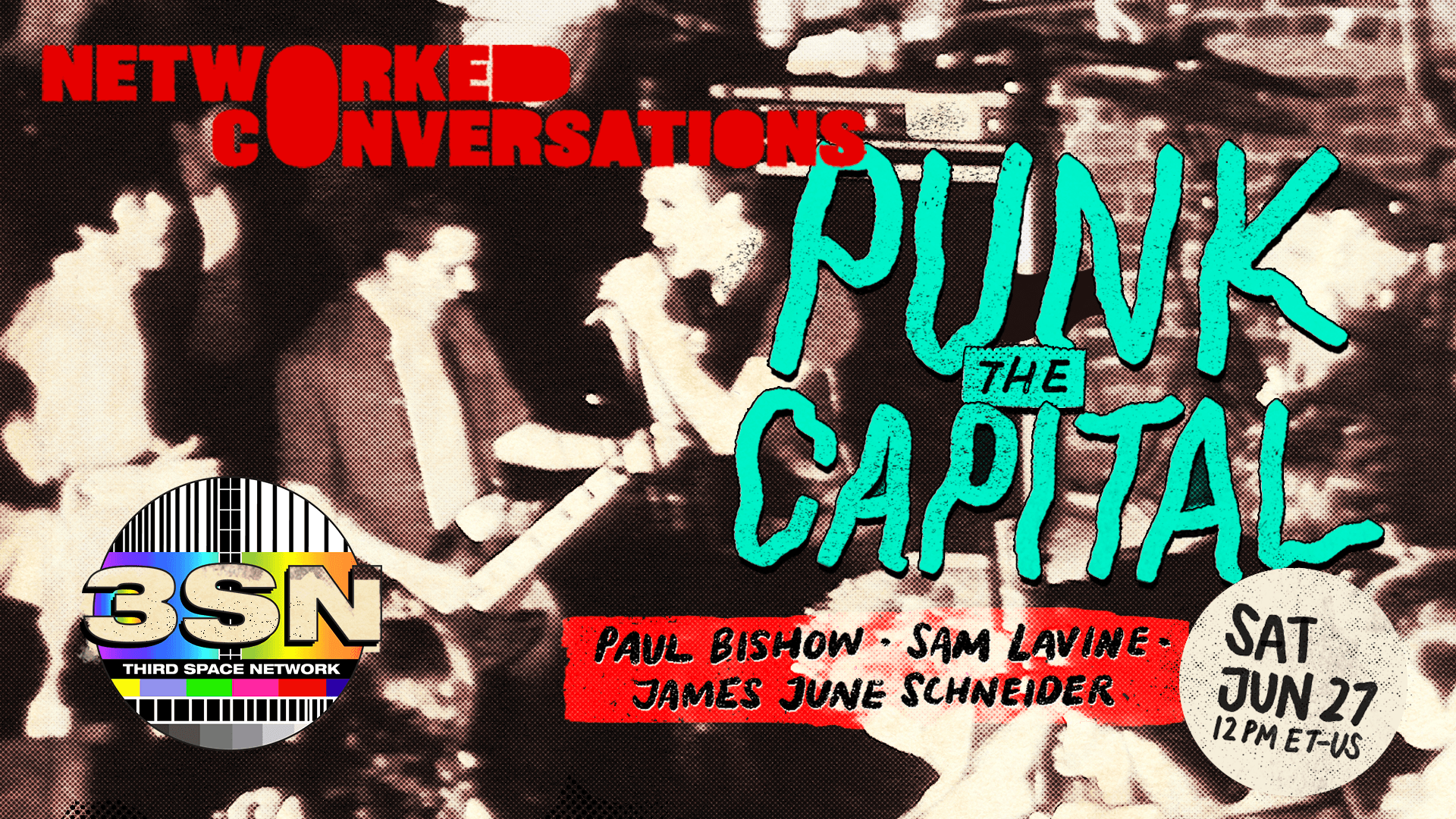 Networked Conversations is online, free, and global. Register & reserve an online seat by clicking on “Save My Spot” in Crowdcast.

When punk rock exploded in Washington D.C., it was a mighty convergence of powerful music, friendships, and clear minds. Punk the Capital explores the transformative period when punk took root in D.C. (1976 to 1983), situating D.C. punk within the larger narratives of punk and rock n’ roll. It takes us to the heart of why both the sounds and ideas from this unique music scene continue to influence and inspire around the world. With a focus on bands such as Bad Brains, Minor Threat, and The Slickee Boys, featuring persons such as Henry Rollins, Ian MacKaye and Cynthia Connolly, the film creates a portrait of a movement that not only redefined a genre but that created a model for DIY culture as well as social and political engagement. https://www.dcpunkrockdoc.info/

Paul Bishow moved to Washington DC in the mid-70s. He has since made dozens of films, both feature length and short subject, mostly in Super-8 format. They range from the film essay Anarchy and Chaos Prelude, DC to Bad Brains(1979) to the feature fiction film It’s a Wonderful Horrible Life (2001). Many DC punk bands have appeared in his films as well as their members, separately, who at times play roles in the more ‘fictional’ of his works. Footage from his films has appeared in many a documentary including Don Lett’s Punk Attitude and Mandy Stein’s Bad Brains, Band in DC (2012). Paul was also a founding member of the I am Ey e Film Forum which graced DC with an underground film series from 1982-1997.

Sam Lavine was born and raised in Washington, DC, where he was heavily influenced by the Punk, Hip-Hop and Go-Go scenes of the 1990’s and early 2000’s. In 2003, Sam joined the tYPE1 circle, a collective of artists who performed in different configurations as the aAvant-G_d Violence, Voids Moan and the Cornel West theory. In addition to playing drums in these groups, Sam also produced several music videos for the collective, which was the beginning of his interest in filmmaking. Sam initially joined Punk the Capital as an editor in 2013, and as the project progressed his role expanded to Associate Producer. Sam continues to record and perform in and outside of DC with both the Cornel West theory and LIGHT BEAMS.

James June Schneider was as born in Washington DC and was raised in the city’s mid-eighties punk and skatescenes. Since 1992, he has been making films and video performing (under the name Matterlink since 2001). His award-winning work has been screened at film festivals, museums, and spaces of all kinds around the world. Schneider’s filmography includes Blue is Beautifu l with Dischord recording artists The Make-Up (1997) and the science-fiction feature The End of the Light Age (2007) starring Lou Castel. More recently, he directed The Band that Met the Sound Beneat h (2012) with the Chilean punk band Panic o and Young Oceans of Cinema, a portrait of France’s “ultimate outsider” filmmaker, Jean Epstein, which premiered at the 2012 edition of the Rotterdam International Film Festival.

Networked Conversations brings people together in live creative dialogue, online via the Third Space Network. As our own alternative media, we debate the latest issues and break the news: all from a uniquely art & activist perspective.
https://thirdspacenetwork.com/networked-conversations/