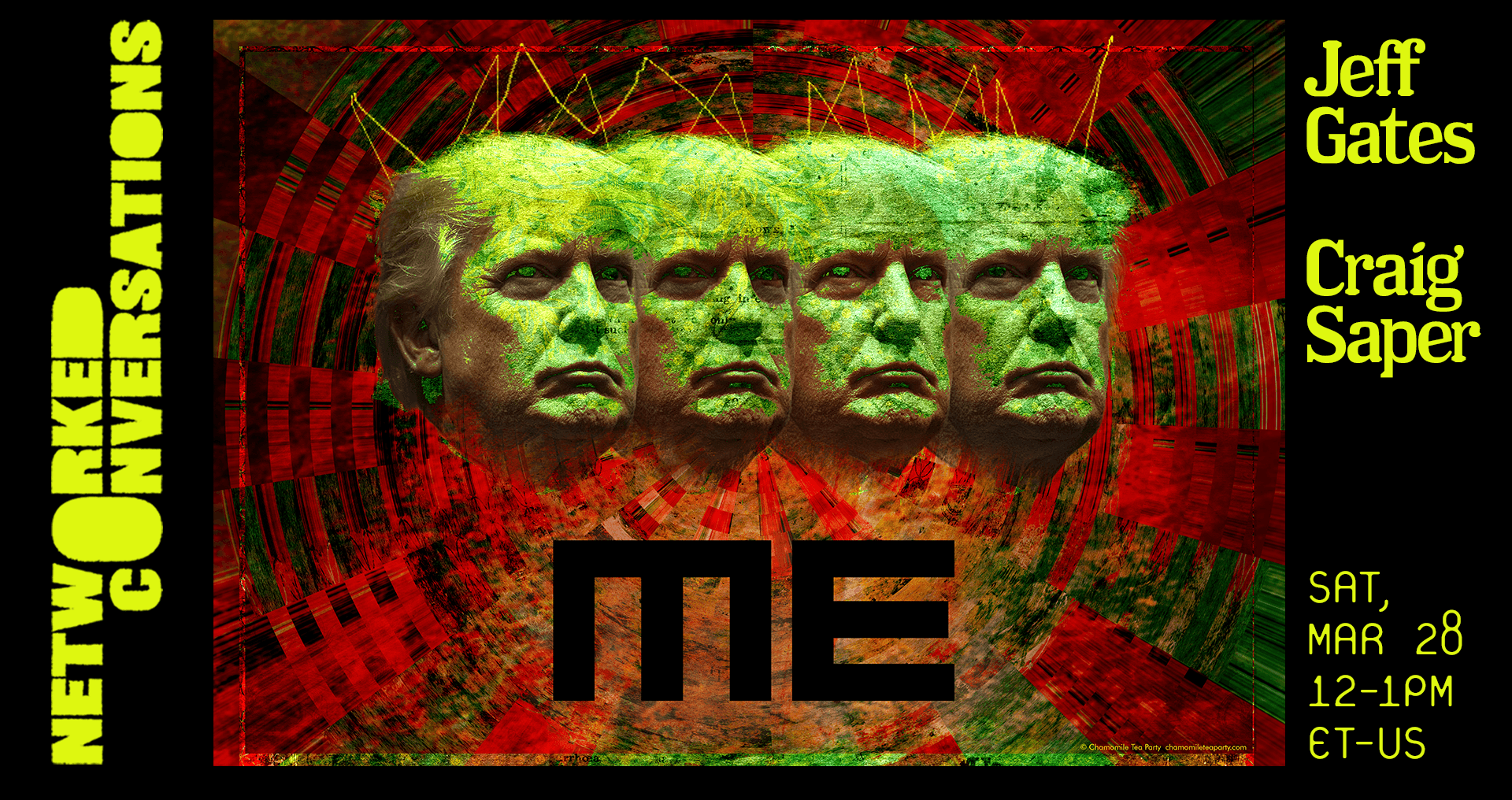 Join us on Saturday, March 28, 12-1pm ET-US with the next broadcast of Networked Conversations featuring media artist Jeff Gates, along with experimental poet/author Craig Saper. Hosted by Randall Packer from the Underground Studio Bunker in Washington DC.

Networked Conversations is online, free, and global. Register & reserve an online seat by clicking on “Save My Spot” in the Crowdcast event below. You will receive notifications once you have reserved your spot.

Jeff Gates is an artist and writer, interested in the interplay between contemporary art practice and American culture. His art and essays on society and culture have appeared in publications such as The Washington Post, The Atlantic, Smithsonian Magazine, National Public Radio, and The Nation. Gates received two National Endowment for the Arts Artists Grants for his art, which is in the collections of major museums such as the J. Paul Getty Museum, Victoria and Albert Museum, Los Angeles County Museum of Art, Princeton University, Baltimore Museum of Art, and Centre George Pompidou. Until recently Gates was the Lead Producer, New Media Initiatives for the Smithsonian American Art Museum. He proposed and helped launch the first blog at the Smithsonian in 2005. While having an institutional blog may seem tame by today’s standards, at the time, it revolutionized how museums delivered new content to online viewers.

Craig Saper writes about art, media, culture, and theory in a series of books: Artificial Mythologies (1997); Networked Art (2001); The Amazing Adventures of Bob Brown (2016); and, using a pseudonym, dj Readies, Intimate Bureaucracies: a manifesto (2012). Saper has co-edited scholarly collections on: Electracy; Imaging Place; Drifts, Mapping Culture Multimodally, and edited and introduced five volumes with Roving Eye Press including The Readies; Words; Gems; 1450-1950; and Houdini. He has published chapters and articles on digital culture, and built readies.org and, with the folk vine collective, folkvine.org. He co-curated readies.org/TypeBound (on typewriter and sculptural poetry). He co-publishes Hyper-Electric Press digital book-equivalent series, on the editorial boards of Rhizomes.net, HyperRhiz.io, and Textshop Experiments. His co-edited new edition, with Saper’s introduction and afterward of Readies for Bob Brown’s Machine, appears with Edinburgh University Press in 2020. Saper is also a professor at UMBC in Baltimore.