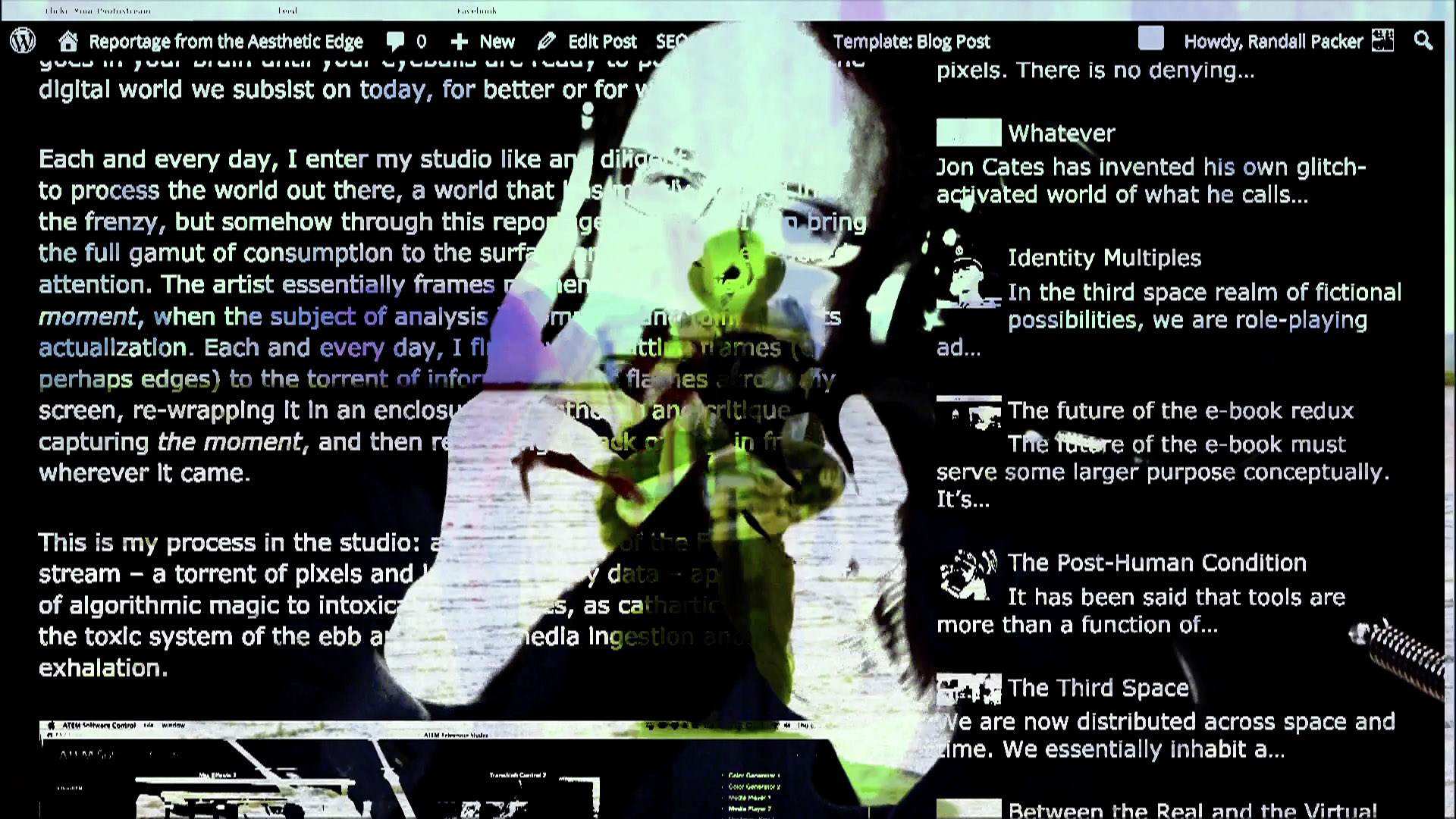 “To be a subject, according to Merleau-Ponty, one must necessarily be part of the world one looks at and touches, therefore one must also be an object of that world.” – Kris Paulsen, Here/There: Telepresence, Touch, and Art at the Interface

The “SHOW” has no beginning, middle nor end… it exists in Internet TIME: continuous and “omnitemporal:” Always On. It is a PLACE (of some kind) to enter into, and be, a SPACE for interaction that is no different from our everyday online interactions across the chattering broadcast space of social media. 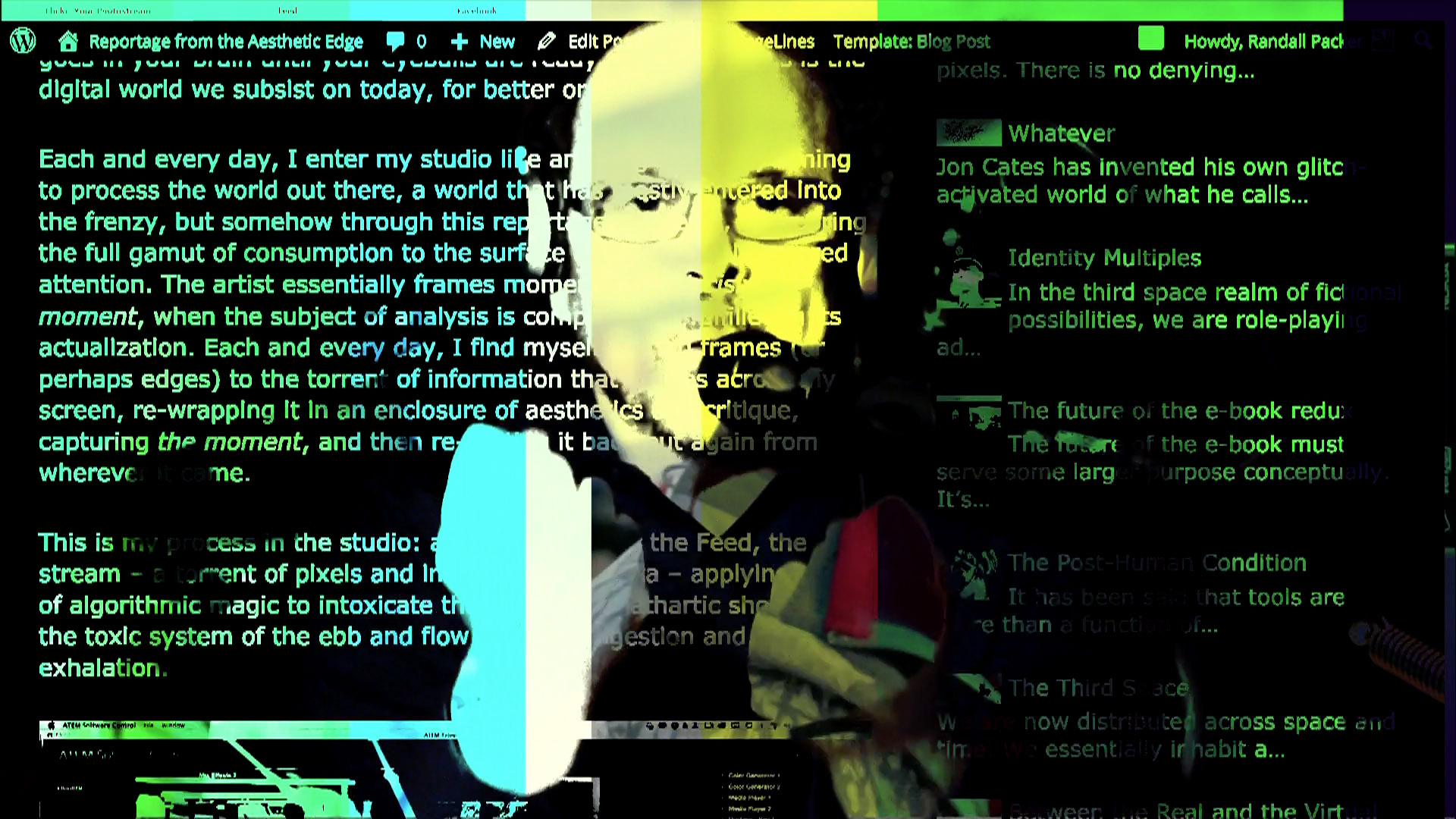 The SHOW is a day’s work in the networked studio, exposed to the broadcast. No one needs to “tune in” to this kind of SHOW, the audience is already THERE, tuned and primed and ready to go. In this sense, the SHOW is unformatted, stripped of formalities, as close as possible to a day online, a day like any other day. It’s so simple: be the HOST of a socially-broadcasted-Internet-time-based-collective-narrative. 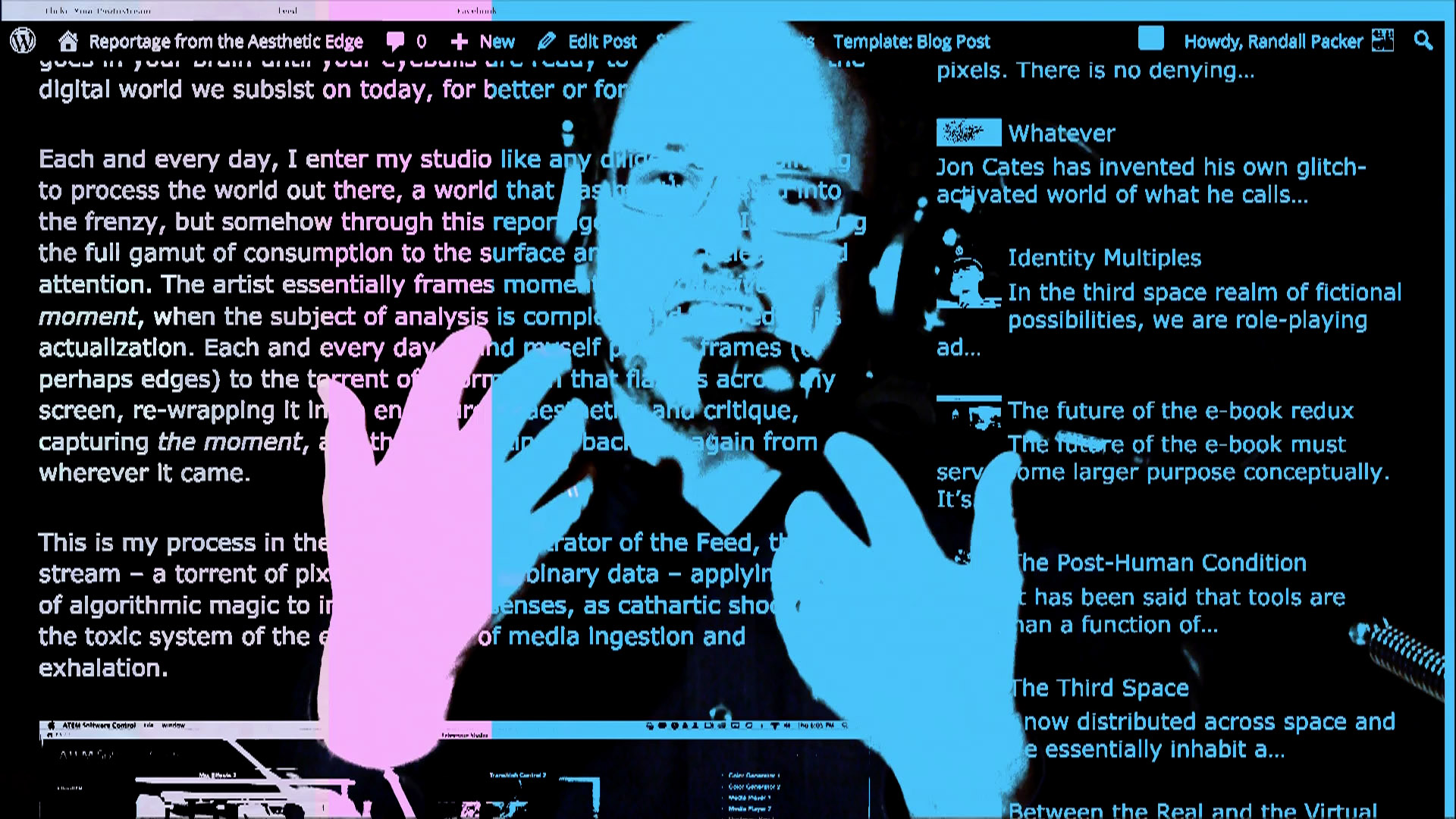 This is the medium where we have come to exist so effortlessly and without pause, through all the various channels we operate in: a medium for super-participatory ingestion and redistribution. It is here I HOST my brand of talk “SHOW” as an all-around-virus, absorbing and regenerating mediated discourse in the virtual realm. In this sense, we are all Internet talk show HOSTS clamoring for one another’s attention in the ceaseless chatter. 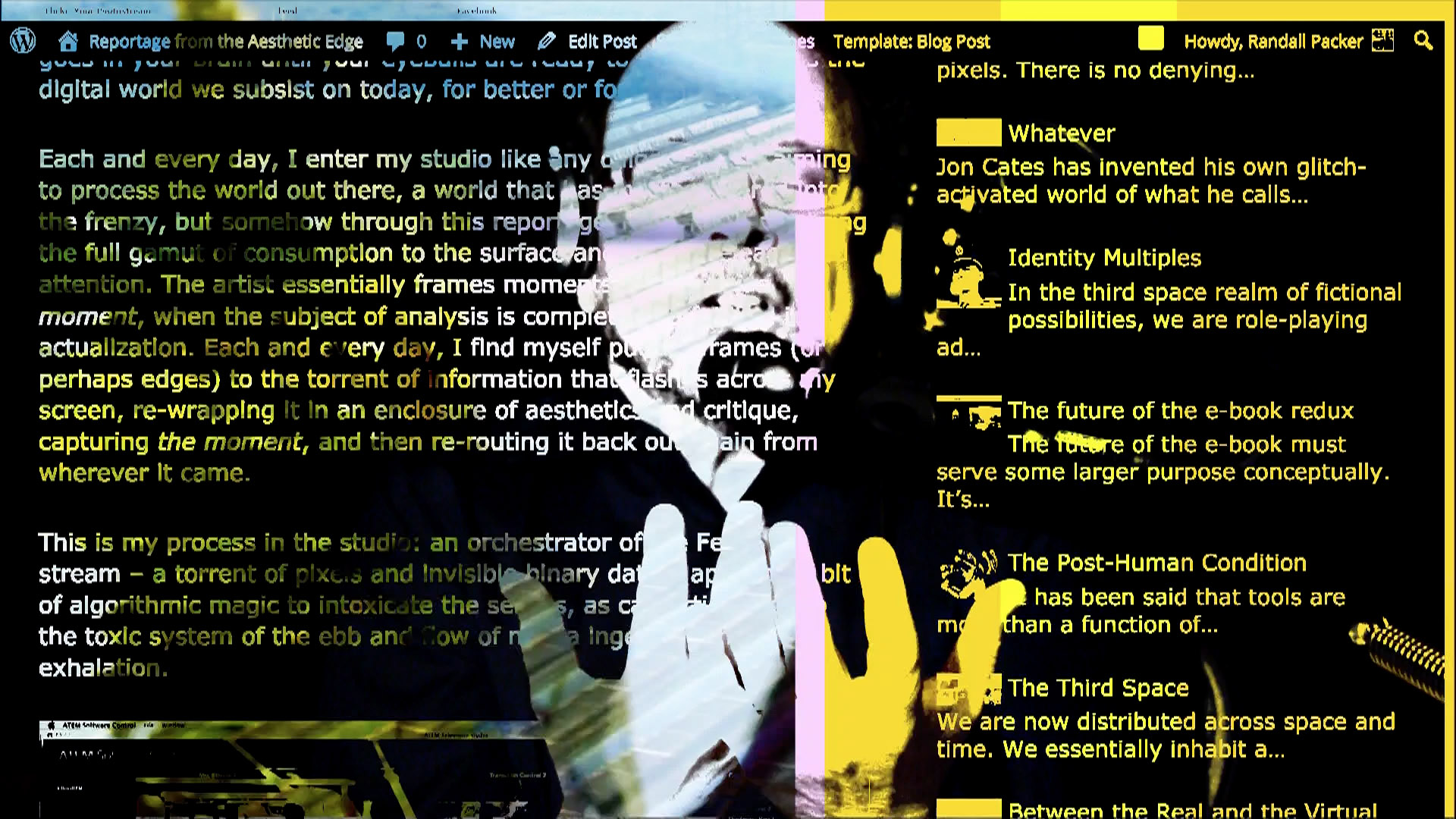 So there is nothing much to producing a SHOW other than to create a frame around yourself and your interactions, nothing much at all, just exposing the contents of your ever-evolving, socially mediated arena of engagements. 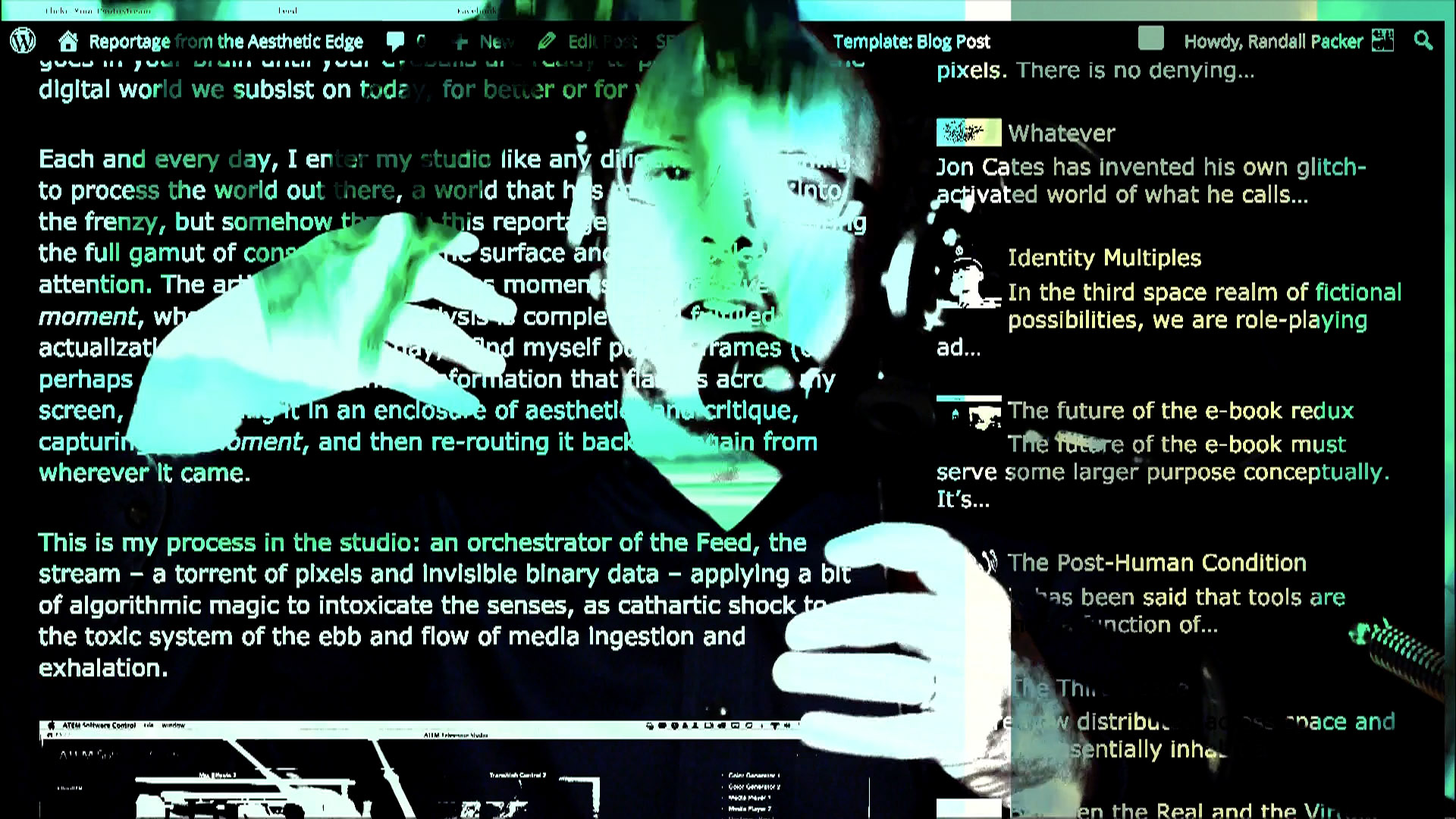 That’s it. That’s all. Nothing more. Nor less. Create a SHOW.