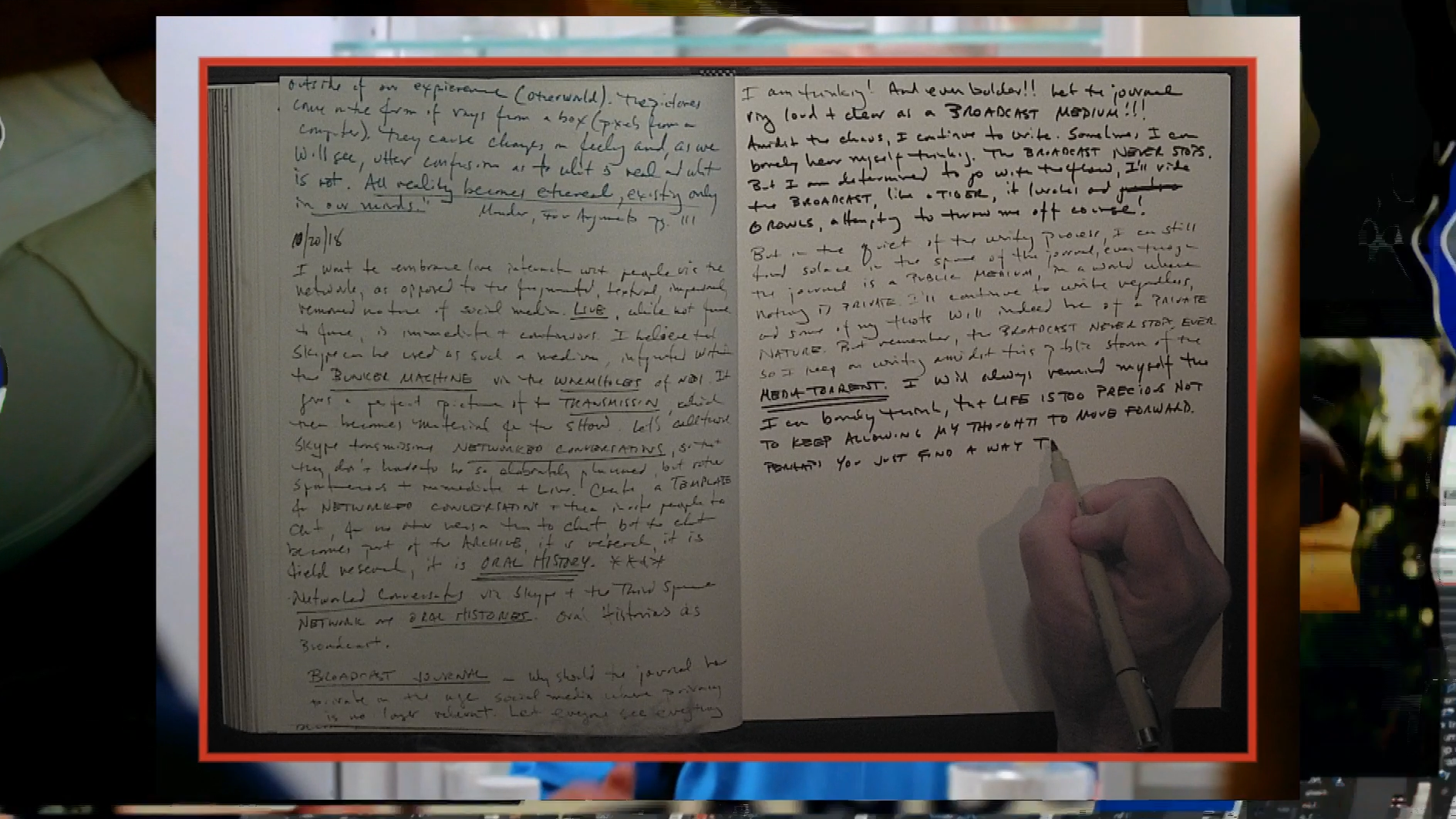 I live and work in the Future Present. The Bunker is my refuge. It is here I maintain a semblance of sanity in a world gone awry. I open my Broadcast Journal and write for the world. Or for my myself. No matter. Everything is open, public, exposed. I live and breathe in front of the camera. My every move is tracked and recorded. But no matter, none of this will stop me from telling my story, a story that must be told amidst the incessant noise that fills my brain each and every day.

Since there is no escape from this post reality, where nothing is true nor false nor real nor virtual, I just ride the wave as best I can. One thing is for sure, the Bunker, despite its 24/7 total exposure, continues to be my sanctuary, my escape route, my vessel to other worlds. It is here I have access to media more powerful than the cable networks. That is, my notebook, my Broadcast Journal. Despite the electronic noise that attempts to penetrate the delicate, analog, physical pages of my journal, I continue to write, with a single mind, to penetrate the noise, get inside of it, let it ring in my brain, while I spill out my narrative, the dissection, the analysis, the critique of living in the Future Present of the Media Torrent.

I consider myself some kind of Writer-Savant, tapping into the chaos and confusion and dysfunction to stimulate thoughts that might have been impossible to access otherwise. For me, the noise has become an inducer and a stimulant. Refusing to succumb to mind control, Writing is a means of release, clarity, criticality: something I used to think I would find in the world of academia. But that was all a Grand Illusion, a decoy, some kind of numbing reassurance that life could be sterilized and transformed into the perfect, clean Workflow. I never bought it, I refused to be institutionalized by the ivory tower. Time and time again, I attempted to escape that madness, but now, my exit is a fait accompli. I have returned to the Bunker, once and for all, where once again I can think and learn and immerse myself in worlds of my creation, worlds that are not forced down my throat by ADMINISTRATORS.

Here in the Underground Studio Bunker, I am a free agent. Just me and my journal and an arsenal of technology all designed to fight the good fight. REVOLUTION! Ah, what a quaint idea, but now, here, pen on paper, book on desk, desk swimming in the Media Torrent, cameras on, imaging flashing, sound reverberating… I’ll tell my (post) REAL story of the Future Present.